Reports of Injuries, Deaths After COVID Vaccines Climb Steadily, as FDA, CDC Sign Off on Third Shot for Immunocompromised

By Megan Redshaw | The Defender 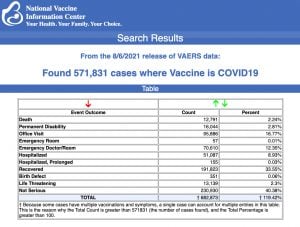 Every Friday, VAERS makes public all vaccine injury reports received as of a specified date, usually about a week prior to the release date. Reports submitted to VAERS require further investigation before a causal relationship can be confirmed.

The most recent reported deaths include a 15-year-old boy (VAERS I.D. 1498080) who previously had COVID, was diagnosed with cardiomyopathy in May 2021, and died four days after receiving his second dose of Pfizer’s vaccine on June 18, when he collapsed on the soccer field and went into ventricular tachycardia; and a 13-year-old girl (VAERS I.D. 1505250) who died after suffering a heart condition after receiving her first dose of Pfizer.

The U.S. Food and Drug Administration (FDA) on Aug. 12 authorized the third dose of Pfizer-BioNTech and Moderna COVID vaccines for people with compromised immune systems.

As The Defender reported Aug. 13, neither vaccine has yet received full FDA approval, and neither has completed late-stage clinical trials proving a third dose will boost immunity or work against COVID variants.

The FDA’s amended Emergency Use Authorization allows people who have had an organ transplant, or those with a similar level of the weakened immune system, to get an extra COVID vaccine dose. The J&J vaccine was not included because there was not sufficient data on boosters, according to the agency.

“Others who are fully vaccinated are adequately protected & do not need an additional dose of COVID-19 vaccine at this time,” Woodcock tweeted.

The vulnerable group of patients makes up less than 3% of U.S. adults, according to CDC Director Dr. Rochelle Walensky.

Diaz and colleagues reviewed 2,000,287 electronic medical records (EMR) of people who received at least one COVID vaccination. The records, obtained from 40 hospitals in Washington, Oregon, Montana, and California, showed 20 people had vaccine-related myocarditis (1.0 per 100,000) and 37 had pericarditis (1.8 per 100,000).

A recent CDC report, based on VAERS data, suggested an incidence of myocarditis of about 4.8 cases per 1 million following receipt of an mRNA COVID vaccine.

The new JAMA study showed a “similar pattern [to the CDC study], although a higher incidence [of myocarditis and pericarditis] after vaccination, suggesting vaccine adverse event under-reporting.”

The JAMA report also stated: “Additionally, pericarditis may be more common than myocarditis among older patients.”

“Our study resulted in higher numbers of cases probably because we searched the EMR, and [also because] VAERS requires doctors to report suspected cases voluntarily,” Diaz told Medscape.

The authors said limitations of their analysis include potentially missed cases outside care settings and missed diagnoses of myocarditis or pericarditis, which would underestimate the incidence, as well as inaccurate EMR vaccination information.

In an exclusive interview last week with The Defender, Emily Jo said before her son, Aiden, got his first dose of Pfizer’s vaccine, she was led to believe his chance of suffering an adverse reaction was “one in a million.”

Aiden, a 14-year-old from Georgia, had no history of COVID or pre-existing conditions, except for asthma. On June 10, several days after his second Pfizer shot, Aiden woke his mother up at 4:30 a.m. because his chest hurt and he couldn’t breathe.

Jo said she was aware of the potential side effect of heart inflammation, but she believed the CDC, which said the reaction was very rare and mild. “What they didn’t explain is that mild means hospital care and follow-up care indefinitely,” Jo said.

Jo said her son tires easily and his recovery will be a long process. She said all her kids are fully vaccinated and she was one of the most trusting advocates of the CDC and American Academy of Pediatrics — until her son experienced his vaccine injury.

Another sad story! Mom so proud that her 14-year-old son could get the COVID vaccine… but now doctors confirm her son meets the criteria for having post-vaccine myocarditis.

In another exclusive interview last week with The Defender, Deborah Brenner said her son, a healthy 25-year-old from Ohio, experienced myocarditis five days after his first dose of Moderna’s COVID vaccine, administered on July 22.

Christopher Brenner developed a fever after the vaccine, and within five days, he was experiencing chest pain so intense he was unable to sleep, so he went to the Defiance Mercy Clinic.

When Christopher was in the ER, tests showed his troponin levels were high. “I was alarmed at that point,” Brenner said.

“One of the ER nurses mentioned it could be myocarditis from the vaccine, but everyone else played it down like it was serious — but wasn’t a big deal,” Brenner said. “When his numbers jumped higher, that’s when it became more serious.”

When nurses took Christopher’s troponin level a second time it was higher, so they kept him overnight.

Christopher’s troponin level continued to rise, so he was transferred by ambulance to St. Vincent Hospital in Toledo. Benner said the cardiologists in Toledo were totally against connecting the reaction to the vaccine. “They didn’t want to go there, didn’t want to talk about it, and just said his numbers would come back down,” she said. “I was getting really frustrated because I was wondering what was going on in his heart that we couldn’t see.”

After four days of being hospitalized and treated with blood thinners and beta-blockers, Christopher was discharged. The discharging doctor told Brenner he didn’t know why the other physicians didn’t want to admit her son’s reaction was caused by the vaccine.

European drug regulators on Aug. 11 said they are studying three new conditions reported by a small number of people after they took the Pfizer and Moderna vaccines.

The EMA did not give details on how many cases of the new conditions were recorded but said it had requested more data from the vaccine makers.

The regulator, which disclosed the new assessments as part of routine updates to the safety section of the authorized vaccines’ database, did not recommend changes to the labels of mRNA vaccines at this time.

As The Defender reported Aug. 11, a new preprint study showed mRNA vaccines’ effectiveness plummeted in July when Delta variant was dominant — with Moderna only 76% effective and Pfizer only 42% effective against infection.

A new preprint study showed mRNA vaccines’ effectiveness plummeted in July when Delta variant was dominant — with Moderna only 76% effective and Pfizer only 42% effective against infection.

The study, which raised concerns about the effectiveness of mRNA COVID vaccines — particularly Pfizer’s — against the Delta variant, caught the attention of top Biden administration officials, Axios reported.

“If that’s not a wake-up call, I don’t know what is,” a senior Biden official told Axios.

The study, which has yet to be peer-reviewed, compared the effectiveness of Moderna and Pfizer COVID vaccines in the Mayo Clinic Health System from January to July 2021, during which time either the Alpha or Delta variant was highly prevalent.

But vaccine efficacy dropped sharply in July when the Delta variant was more prevalent. Moderna was only 76% effective against infection and Pfizer was only 42% effective.

“We observed a pronounced reduction in the effectiveness of BNT162b2 [Pfizer] coinciding with the surging prevalence of the Delta variant in the United States, but this temporal association does not imply causality,” Venky Soundararajan and his co-authors wrote.

The authors concluded “further evaluation of mechanisms underlying differences in their effectiveness such as dosing regimens and vaccine composition are warranted.”

According to the CDC website, “the CDC follows up on any report of death to request additional information and learn more about what occurred and to determine whether the death was a result of the vaccine or unrelated.”

On March 8, The Defender contacted the CDC with a written list of questions about reported deaths and injuries related to COVID vaccines. We have made repeated attempts, by phone and email, to obtain a response to our questions.

Despite multiple phone and email communications with many people at the CDC, and despite being told that our request was in the system and that someone would respond, we have not yet received answers to any of the questions we submitted. It has been 144 days since we sent our first email to the CDC requesting information.

Children’s Health Defense asks anyone who has experienced an adverse reaction, to any vaccine, to file a report following these three steps.

Megan Redshaw is a freelance reporter for The Defender. She has a background in political science, a law degree, and extensive training in natural health.