As Protests Erupt, Some Countries Backtrack on COVID Mandates While Others Double Down 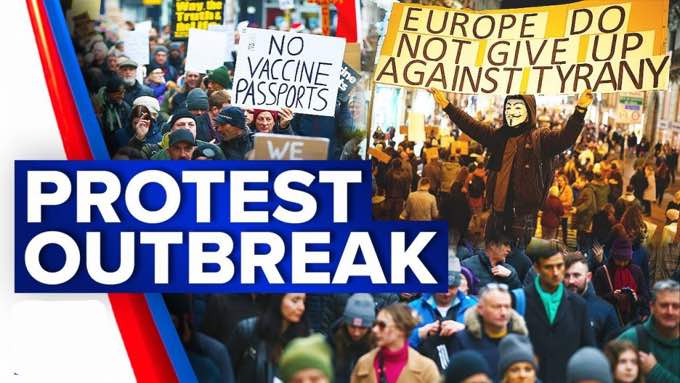 By Michael Nevradakis, Ph.D. | The Defender

As protests grow in EU countries and worldwide against COVID-19 vaccine mandates and so-called “vaccine passports,” some countries appear to be backtracking or at least harboring second thoughts about enforcing such measures.

Some policymakers point to evidence COVID is here to stay and we need to live with it since Omicron is similar to the common cold or seasonal flu. Others appear more willing to accept natural immunity in lieu of vaccination.

Still, other governments are digging in their heels and moving forward with punitive restrictions on the unvaccinated.

Here’s a look at the latest shifting policies outside the U.S.

Austria garnered much attention in November 2021 when it became the first country in the world to impose an all-encompassing vaccine mandate for its entire adult population and minors 14 years old and up.

This mandate, set to take effect in February, would be accompanied by fines of up to 3,600 euros per quarter. To that end, Austria recently reportedly began hiring “headhunters” to track down those who continue to remain unvaccinated.

The mandate has resulted in frequent large-scale protests against the mandate, as well as a political movement opposing this policy.

This opposition may be having an impact. Recently, the firm responsible for the technical implementation of the mandate announced that due to “technical complications,” the mandatory vaccination law cannot be enforced until at least April.

This news came amidst calls in Austria that the mandate should be reevaluated in light of the spread of the Omicron variant.

Similar concerns over the feasibility of rapid implementation of a vaccine mandate have been raised in Germany, which has also mulled the implementation of compulsory vaccinations and has already approved such a mandate for healthcare workers.

Nevertheless, concerns have been raised in Germany that parliamentary debate and subsequent technical implementation of a vaccination database cannot be completed before June at the earliest, calling into question the feasibility of the mandate in light of rapidly changing conditions.

Such hesitation comes despite renewed calls from German President Frank-Walter Steinmeier for an immediate full parliamentary debate on a potential vaccine mandate, and from German Chancellor Olaf Scholz for COVID vaccines to be mandated.

Similarly, German Health Minister Karl Lauterbach recently suggested vaccine mandates, not natural herd immunity stemming from the rapid spread of the Omicron variant — which he described as “dirty vaccination” — represent the only way “out” of the crisis.

In November 2021, Lauterbach’s predecessor, Jens Spahn, publicly predicted that by the end of the coming winter, everyone would be “vaccinated, recovered, or dead” — due to the Delta variant.

Soon thereafter, in December 2021, U.S. President Joe Biden made a similar warning, predicting a winter of “severe illness and death” for the non-vaccinated.

Despite these public proclamations from German politicians though, recent reports suggest support for a vaccine mandate in Germany’s three-party governing coalition is far from unanimous.

Nevertheless, some localities in Germany are moving ahead with their own innovative means of confirming individuals’ vaccination status.

The city of Saarbrücken will soon launch a system where individuals who received a COVID vaccine or who have recovered from infection can voluntarily wear a colored wristband to indicate their status.

Greece was one of the first countries in Europe to implement a vaccine mandate for a portion of its general population when, in December 2021, it imposed such a policy for everyone age 60 and over.

The policy is set to take effect on Jan. 16, with fines of 100 euros per month levied against anyone who doesn’t comply.

Despite this policy, which has received broad and highly sensational media attention in Greece, and despite the burden the policy would place on pensioners in a country where the average pension is just over 700 euros per month, a significant number of individuals 60 and older appear to have opted to remain unvaccinated.

In late December 2021, it was reported that 400,000 people in this age group had not received the COVID vaccine.

In a televised appearance on Jan. 11, Greek government spokesperson Giannis Oikonomou stated that 200,000 people aged 60 and over had gotten vaccinated as a result of this mandate, touting this as a “big success.”

However, this would suggest approximately half of the relevant population in question had chosen to remain unvaccinated, despite the looming threat of a financial penalty.

It is perhaps, for this reason, the Greek government reportedly “froze” any further discussion of expanding the mandatory vaccination policy to those aged 50 and over, while it has been suggested the measure is unconstitutional and may eventually be struck down judicially.

However, despite rumors that the enforcement of fines against individuals 60 and older who have not been vaccinated would be postponed, Greece’s far-right Interior Minister Makis Voridis announced the policy would be enforced as originally planned.

Nevertheless, the Greek government will now extend existing measures, which include a midnight curfew and ban on music for dining and entertainment venues, and a 1,000-spectator capacity limit at sporting events, for at least an additional week past the original sunset date of Jan. 16.

In the Balkans, protests lead to a standstill on mandates

Major protests against the so-called “Green Pass,” or vaccine passport, took place recently in both Bulgaria and Romania.

In Bulgaria, protesters on Jan. 12  stormed the parliament building in opposition to the “Green Pass” and other restrictions. Attempts to enter parliament resulted in clashes with police and multiple arrests.

Similar events transpired recently in Romania, where on Dec. 21, 2021, protesters attempted to enter Romania’s parliament as part of a protest against proposed legislation making the “Green Pass” mandatory for workers.

Disagreements that have since followed between the parties which comprise Romania’s governing coalition have resulted in talks on this proposed policy coming to a standstill.

Notably, Bulgaria and Romania have the lowest and second-lowest COVID vaccination rates in the EU as of this writing.

As attempted moves toward wide-ranging vaccine mandates and broader implementation of vaccine passports appear to be floundering in Europe, such hesitation has increasingly been accompanied by ever more vocal suggestions that a form of herd immunity, via natural infection stemming from the rapid spread of the milder Omicron variant, should be considered at the policymaking level.

In Israel, for instance, a country that was among the first to move forward with a mass vaccination and booster campaign against COVID, health officials are mulling a “mass infection model.”

On Jan. 11, EU regulators, who had previously supported the administration of COVID booster shots every three months, had a sudden about-face, warning about the dangers the continued administration of boosters could pose for the human immune system.

That same day, the World Health Organization issued a remarkably similar warning, stating that “a vaccination strategy based on repeated booster doses of the original vaccine composition is unlikely to be appropriate or sustainable.”

Just one day prior, on Jan. 10, Spanish Prime Minister Pedro Sánchez suggested European officials should move towards treating COVID as an endemic illness, calling for a debate on the issue and for a move away from the detailed pandemic case tracking system in place since early 2020.

Meanwhile, certain European countries appear to be shifting away from considering a mandatory vaccination policy for their populations. Irish Prime Minister Michael Martin said his country will maintain a system of voluntary vaccination, while Belgian Prime Minister Alexander De Croo said his intention is to give people a “free choice” on the matter.

This shift is occurring despite remarks made on Dec. 1, 2021, by Ursula von der Leyen, president of the EU Commission, who said it is time to “potentially think about mandatory vaccination within the European Union” and to have a “discussion” about this possibility.

The gradual shift away from vaccine mandate policies in Europe and elsewhere is far from uniform, with punitive restrictions and policies continuing to be implemented in several countries.

In Italy, for instance, mandatory vaccination was expanded on Jan. 5 to everyone age 50 and older. The unvaxxed will face a potential fine ranging from 600 to 1,500 euros.

French President Emmanuel Macron made waves in an interview with the Le Parisien newspaper on Jan. 4, justifying the implementation of his country’s “Green Pass” by stating “I really want to piss them off, and we’ll carry on doing this — to the end” and that “irresponsible people [the unvaccinated] are no longer citizens.”

Despite uproar and protests that his comments generated, Macron later doubled down on these remarks.

On Jan. 11, the premier of the Canadian province of Quebec, Francois Legault, stated adults who refuse the COVID vaccine will face a “significant” financial penalty.

This statement came on the heels of remarks made on Jan. 7 by Canadian Health Minister Jean-Yves Duclos. When asked whether mandatory vaccination was on the horizon in Canada, Duclos stated, “I personally think we will get there at some point.”

Canadian Prime Minister Justin Trudeau previously stated, in May 2021, that “[w]e’re not a country that makes vaccination mandatory.”

Other countries have resorted to more extreme, albeit “temporary,” measures.

Non-vaccinated individuals in one Australian state, the Northern Territory, were recently required to stay home for a four-day period, with limited exceptions. The conclusion of this four-day ban coincided with the launch of vaccine passports in the territory.

And in the Philippines, the country’s president, Rodrigo Duterte, called for the arrest of non-vaccinated citizens who venture outside their homes, in light of what he described as the “galloping” spread of the coronavirus.

This nevertheless may represent a milder stance on the part of Duterte, who in April 2020, empowered the police and military with shoot-to-kill orders against lockdown violators.

Michael Nevradakis, Ph.D., is an independent journalist and researcher based in Athens, Greece.