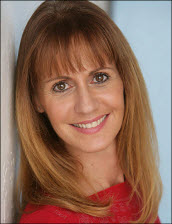 Vicki Howie has always been a spiritual seeker. Childhood trauma set her on a path to heal herself and learn as much as she could about personal transformation. As a young adult, she read Seth books, attended Unity Church and earned both her B.A. and M.A. degrees in Behavioral Communications from the University of Washington.

After college, Vicki tried out several interesting vocations, including sushi maker, radio host, and professional stand up comedian, before she became a yoga instructor in 2000 and began her love affair with the chakras.

In 2008, Vicki healed her own first chakra deficiency by getting a real root tattoo, and decided to make temporary chakra tattoos to help others balance their chakras as well. Her Chakra Boosters Healing Tattoos™ have now been worn in 27 countries and were chosen as Runner Up for “Best Healer Tool” by About.com Readers.

Vicki is a Life Coach, Certified Hypnotherapist, NLP Practitioner and Experienced Registered Yoga Teacher. She’s also a musician. In 2013, Vicki and music partner, Jeff Bonilla, released the well-received healing album, “Chakra Love.” Vicki loves to help people understand their chakras and open to the power they have within. She offers numerous free chakra related gifts on the home page of her website: ChakraBoosters.com.