There’s a tendency not to speak too much of the 3D mind in terms of alignment with the 5D shift, other than letting go of identification with it. But the energy on earth and in society is terraforming strongly through the field, and we can craft the mind as a powerful ally within our creative endeavors. We must also guard against it becoming a surreptitious prison that unconsciously limits our progression.

Law of Attraction and Intentional Manifesting

It’s clear the mind is an invisible prison cell for many. Plenty are completely unaware of its incredible power to weave 3D reality. Motivational gurus, the world over, speak of focussing and visioning to get the outcomes in life that “you”, seek (all too often the “you” is the ego!). Athletes envision the victory they want; business leaders summon the steps to success in the marketplace. And even intentional manifestors in the spiritual mainstream vision the outcome they desire. In many cases it seems to work – if the proponent is committed and disciplined enough, the desired outcomes are materialized – this is often expressed as the “Law of Attraction” – you’re intentioning what you want to attract in life. 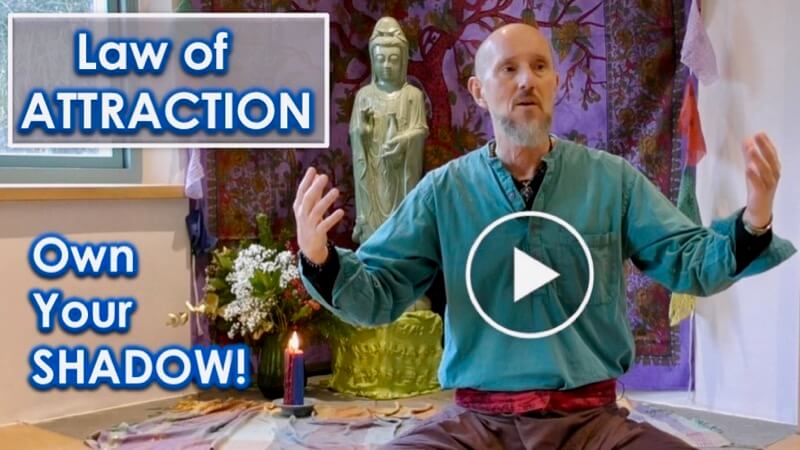 Of course, there’s a big problem with this: who is setting the agenda – where are the impulses coming from? Usually, it’s the ego, with shadowy Opposing Consciousness in the field that seeks to lock the soul into a prison, which is interrelated with the matrix itself. You’re unwittingly bound into the 3D/4D construct. But likewise, simply “letting go” of the mind completely, can leave you listless and also at the whims and machinations of 3D living.

What we need to do is detach from the mind, become the divine co-creator, AND THEN take ownership of the mind, so that it becomes a powerful ally in the channeling of 5D consciousness in this terraforming landscape.

What does that look like in day-to-day and how do we achieve it?

Firstly it’s essential to spend considerable time, probably even years, softening the mind from the desire for a particular outcome or the fears of what might unfold in the day-to-day. You detach from it by becoming the observer of yourself, whereupon you recognize you are NOT the mind. But this is only the beginning of the story – we must constantly confront the inner tightness that happens when the mind continues to grasp in given situations. 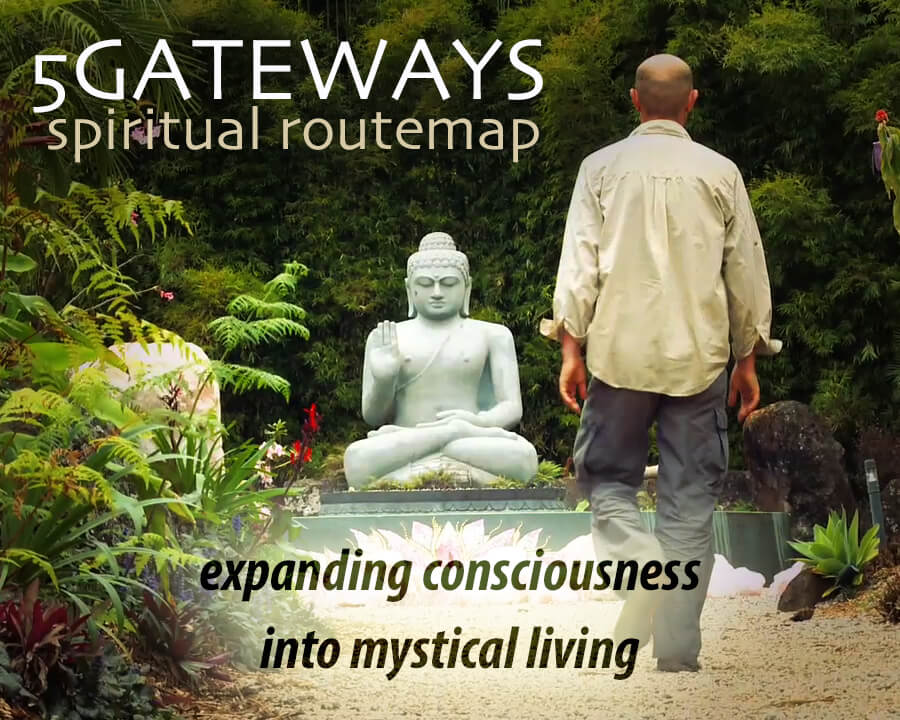 You can literally feel it throughout the body as tightening angst. In particular circumstances of fear or worry, it will shorten the breath and stiffen the gait. If you watch and feel the face, micro-expressions react in relational engagements where the soul’s authenticity is being buried. As unpleasant as they are, they happen to be the opportunistic gateways through which to open, release and transcend. They’re utterly invaluable.

Divine Service and the Merkabah

After some considerable time then, the mind softens as the soul naturally takes over. The soul is channeling through you; you’re becoming more aligned with the flow, more authentic, you’re co-creating with the divine within the 5D Shift on the planet. Things start to make more sense in a world gone crazy – there’s a deepening sense of peace as you center in the Sacred Ground of Being, that which sits in the heart of the Universal Torus. You feel like you belong to something much bigger than the ego – at times you’ll feel very blessed! 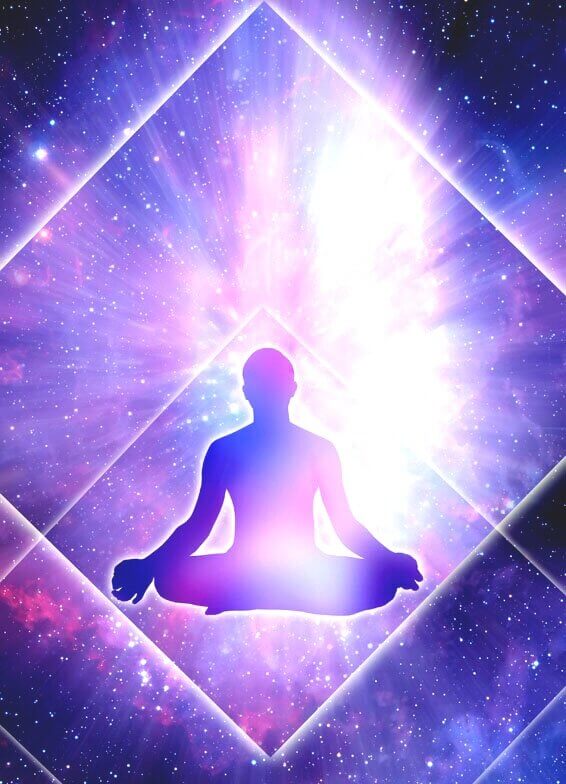 From this place you’ll likely feel an increasing impulse to want to serve: to help others find their own divinity; to help nature heal; to work with the unraveling in the shift. And so there will most likely be a compulsion to engage in the 3D/4D construct once more. Crucially though, it’s essential we approach things in a different way now – that we craft the mind as a powerful ally through which to channel higher dimensional consciousness – this is a crucial part of the marrying between higher and lower self, that leads to the formation of the “Merkabah”, which is a key objective here in the Openhand work for the 5D Ascension.

The mind must become synchronized with the infusing higher dimensional consciousness. This can be achieved most effectively by witnessing signs and synchronicity, symbols, and sacred geometry. Where this becomes a regular part of your day, then you’re actually starting to weave reality here in the 3D/4D by bringing mindful attention to these reflections.

Crucially the mind is still open: in that, you’re guided much more by active attention rather than focussed intention. You’re playing the tune of the universe, asking, “show me!” whereupon you’ll start to notice the instant flash of higher knowing or the heartfelt pull. We’ll often use freewheeling on the Openhand gatherings to enhance this effect. 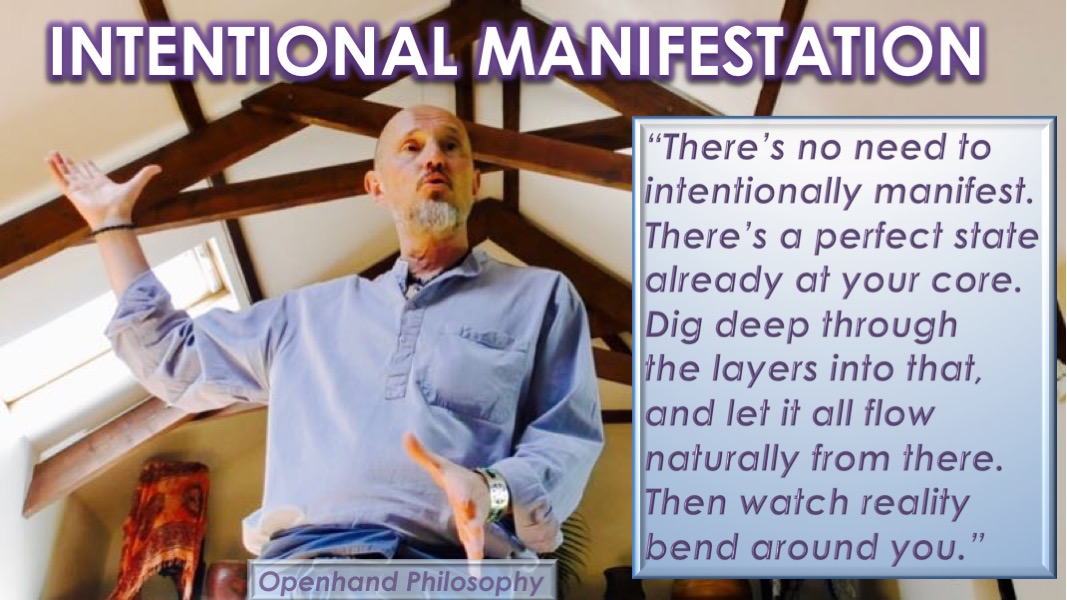 Once you have this flow coming through you, it’s highly possible you’ll get visions and senses of an idea of where the creative action is wanting to move towards – what the flow itself is wanting to create through you. This happens in all areas of life, from career possibilities to relationships, to how you generally live in the day-to-day.

When you’re building reality this way, it’s absolutely fine to now hold the vision as a possibility. However, unlike the intentional manifesting approach, the vision must be held lightly. Yes, at times, you’ll have to overcome density, blockages, and clear resistance in the field (including Opposing Consciousness) so that you can still move towards the divine vision. But if the signs and synchronicity keep pointing that way, then the divine invitation is still active. In such situations, you’ll need to unravel much inner doubt and forge the sense of divine trust – which builds step by step in the daily cauldron of life. 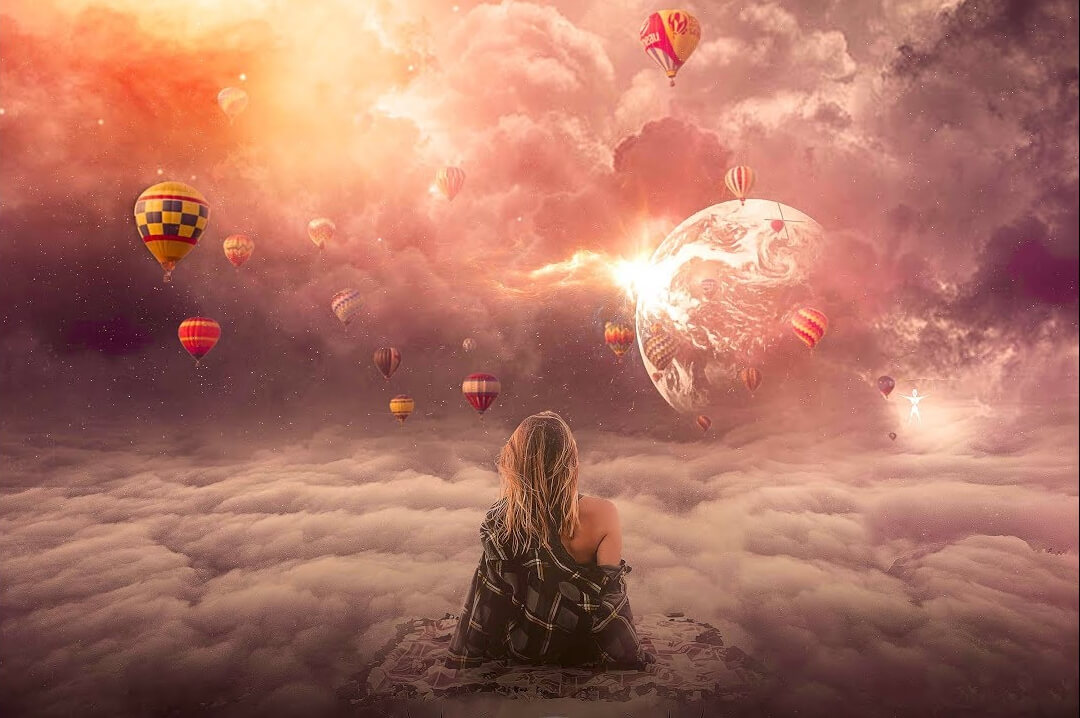 It’s essential to maintain peripheral vision too. Meaning that as you’re moving toward a creative crystallization, then you’re still attentive to the possibility that the goal could naturally shift and change – the soul is constantly flowing and although it will create endlessly, it is not fixated on the need for any particular outcome. To be clear, it yearns to create with the divine, and it will, but inherent in its being, is the knowledge that there will always be a way through the external density to actualize the divine. It is the infinite game player, undefeated by any particular twist and turn of events.

I find that nature greatly helps in this regard – when you’re confused as to direction, the invitation is to actually find a new aspect of beingness, which often gets reflected back to you by creatures in nature.

Over time, you find yourself weaving a heavenly multidimensional landscape around you, where you witness and experience divine feedback loops supporting your steps – plentiful reflections of synchronous connectivity around you. At times things will go deathly quiet where you’re working through some particular density, but if you keep opening through the mind and the inner tightness, the fears, worries, and contractions, then the light will flow through once more and you’ll pick up the heavenly flow. This is what it means to become the Infinite Game Player of life – you’re constantly finding a new way to co-create with the divine.

The Mind: Our Powerful Friend and Ally in the Shift 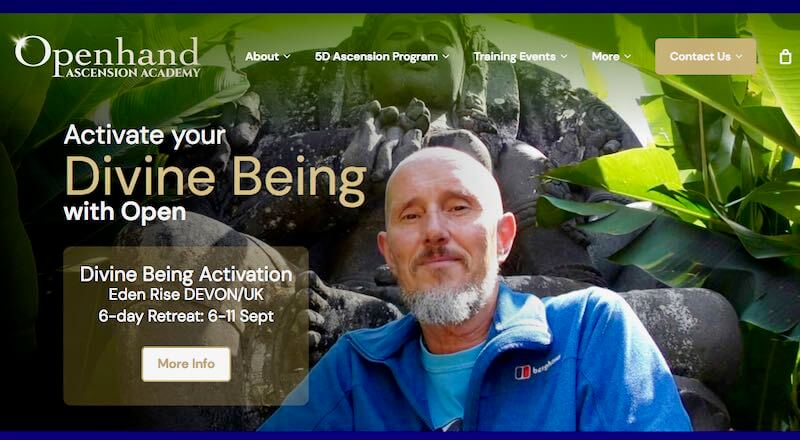 The mind can thus be your powerful friend and ally in the shift. You can willingly bring it to bear in all your creative endeavors. And then you get to see just what a powerful tool it can really be. I commend to all on the ascending path to dive deeply into cleansing and reacquiring ownership of the 3D mind. It’s a crucial aspect of the Merkabah – your divine vehicle through the 5D Ascension Shift.

Crafting the mind in this way is a fundamental aspect of Openhand’s work. If you resonate, come and explore further…
Openhand Ascension Academy