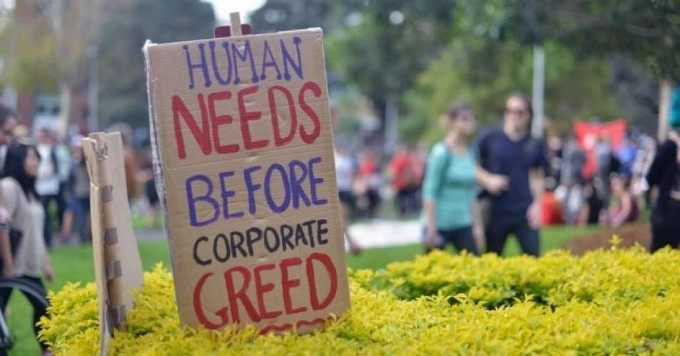 Before the coronavirus hit, the U.S. was already experiencing some of the highest levels of inequality and the largest racial wealth gaps in recent memory. Is that what we should strike to “bounce back” to? (Photo: jerry dohnal/Flickr/cc)

COVID-19 has set the U.S. economy on fire. More than 30.3 million unemployment insurance claims were made over the last six weeks – the equivalent of roughly 19% of the nation’s civilian workforce. By some estimates, 12.7 million workers may have already lost their employer-provided health insurance, not counting any dependents who were covered under those plans. And, while the pandemic is affecting everyone, everywhere, persons, communities, and businesses of color are bearing disproportionate shares of the burdens.

Given the magnitude of devastation experienced thus far, it is not surprising to see increasingly hostile calls for the suffering to end. Americans want to put out the fire. And top officials at all levels of government seem quick to respond with promises that life will go “back to normal” in short order. The economy, they say, will “really bounce back” in a matter of months.

Setting aside questions of how (un)realistic such promises might be, is an unqualified “return to normal” a good thing? Do we really want to just “bounce back?” After all, before the coronavirus hit, the U.S. was already experiencing some of the highest levels of inequality and largest racial wealth gaps in recent memory – disparities that are on track to be exacerbated by COVID-19. At the same time, more than one-fifth of American children already lived in poverty. Experts suggest that food security has become an even greater issue for these children as a result of the pandemic. Are these the “normal” circumstances to which we hope for an immediate return?

One reason that leaders (and their loyal followers) are so eager to settle for “bouncing back” from crises is that moving in a different direction would necessitate more short-term sacrifice. In other words, it is neither quick nor cheap – nor always popular – to wage war on the “institutional rigidity” of the status quo. Another reason is that many leaders and experts genuinely believe that bouncing back to normal is the hallmark of resilience; and, as such, it is what we ought to aim for once the fire is extinguished.

Both of these justifications are weak, though the latter is especially flimsy. In particular, a social system is not resilient because it returns to the way it was before a disaster, pandemic, or terrorist attack. A system like that – one characterized by constancy, persistence, and the ability to go back to the way things were – is a stable system. By contrast, a resilient system is one that, when faced with a crisis, adapts and self-organizes to become better prepared to function in the post-crisis world. Put differently, true resilience involves pushing forward – building new capacity in the present to flourish in the future – not just bouncing back.

So, in what ways might we demand COVID-19 responses that contribute to transformative resilience as opposed to idle stability? Recently, a spate of bold proposals and guiding frameworks for approaching recovery have emerged and deserved the full attention of citizens and decision-makers in political jurisdictions everywhere. More narrowly, a specific arena where new public policy efforts can help build resilience is enterprise ownership and design. Ample research shows that worker-owned and worker-controlled enterprises fail at lower rates than traditional firms during economic crises. One reason is that worker-owners can often act more nimbly in difficult times, making short-term collective sacrifices (e.g., production or salary cuts) that promote long-term collective interests.

There are numerous mechanisms for advancing worker ownership through federal, state, and local policy. Yet, one of the timeliest strategies might be to pass federal legislation like the United States Employee Ownership Bank Act. The Act (1) calls for employees to have a right of first refusal when their firm is planned to be sold or closed, meaning that workers have the right to band together to collectively purchase the firm before it can be sold or shut down; and (2) creates a bank to provide loans to facilitate such acquisitions, so long as the buyers are a majority (51%) of the firm’s employees.

Like any national-scale COVID-19 response, creating and endowing an Employee Ownership Bank will come at a large cost. However, as March’s stimulus package demonstrated, Congress can answer the familiar “how will you pay for it?” question swiftly and decisively when crisis brings mass devastation. With the unsettling reality that scores of businesses are at risk of permanent closure due to the pandemic, it seems that more devastation – and not a return to “normal” – is what’s in store for many workers and their families in the months ahead. Rather than sparing no expense on a bounce back, it seems like a better time to start investing in a push forward. Strategies that keep firms open and in workers’ hands are vital nodes along that headlong path.

If, following the Great Fire of 1666, London would have simply rebuilt the same “clogged”, “narrow” combustible urban fabric that it had before, the city would have been in flames again by the time the ashes were scattered. Instead, the 1667 Act for Rebuilding London established institutions to prevent future fires from being able to wreak the same level of havoc on the city. The Act limited “private freedom to a degree necessary to prevent” future disasters. As we rush to put out the fire that COVID-19 ignited on our economy, we need to take the same approach. Resilience does not mean simply bouncing back – it is about boldly advancing into the post-crisis world with fewer vulnerabilities than we had before. Reducing systemic inequities and building the capacity of vulnerable workers and vulnerable populations is how we become a more resilient society going forward.

Russell Weaver, Ph.D., is Research Director at the Cornell University ILR Buffalo Co-Lab. He is the lead author of the book “Shrinking Cities: Understanding Urban Decline in the United States.”  Contact: rcweaver@cornell.edu | http://highroadpolicy.org