Total Solar Eclipse August 2017: When, Where and How to See It (Safely) 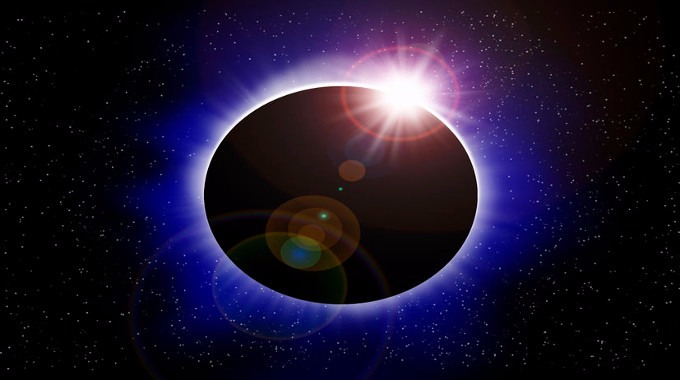 On Aug. 21, 2017, people across the United States will see the sun disappear behind the moon, turning daylight into twilight, causing the temperature drop rapidly and revealing massive streamers of light streaking through the sky around the silhouette of the moon. On that day, America will fall under the path of a total solar eclipse.

The so-called Great American Total Solar Eclipse will darken skies all the way from Oregon to South Carolina, along a stretch of land about 70 miles (113 kilometers) wide. People who descend upon this “path of totality” for the big event are in for an unforgettable experience.

Here is Space.com’s complete guide to the 2017 total solar eclipse. It includes information about where and when to see it, how long it lasts, what you can expect to see, and how to plan ahead to ensure you get the most out of this incredible experience.

Update for July 21: We are officially just ONE MONTH AWAY from the 2017 total solar eclipse! Space.com has teamed up with Simulation Curriculum to offer this awesome Eclipse Safari app to help you enjoy your eclipse experience. The free app is available for Apple and Android, and you can view it on the web. Plus: Here’s the Best ISO-Certified Gear to See the 2017 Solar Eclipse

REMEMBER: Looking directly at the sun, even when it is partially covered by the moon, can cause serious eye damage or blindness. NEVER look at a partial solar eclipse without proper eye protection.

A total solar eclipse occurs when the disk of the moon appears to completely cover the disk of the sun in the sky. The fact that total solar eclipses occur at all is a quirk of cosmic geometry. The moon orbits an average of 239,000 miles (385,000 kilometers) from Earth — just the right distance to seem the same size in the sky as the much-larger sun. However, these heavenly bodies line up only about once every 18 months.

Outside the path of totality, sky-watchers in the continental U.S. and other nearby areas will see a partial solar eclipse, in which the moon appears to take a bite out of the sun’s disk. Two to five solar eclipses occur each year on average, but total solar eclipses happen just once every 18 months or so.

How Solar Eclipses Work: When the moon covers up the sun, skywatchers delight in the opportunity to see a rare spectacle. See how solar eclipses occur in this Space.com infographic.Credit: Karl Tate, SPACE.com Contributor
What will I see during a total solar eclipse?

During a total solar eclipse, the disk of the moon blocks out the last sliver of light from the sun, and the sun’s outer atmosphere, the corona, becomes visible. The corona is far from an indistinct haze; skywatchers report seeing great jets and ribbons of light, twisting and curling out into the sky.

“It brings people to tears,” Rick Fienberg, a spokesperson for the American Astronomical Society (AAS), told Space.com of the experience. “It makes people’s jaw drop.”

During totality, the area inside the moon’s shadow is cloaked in twilight — a very strange feeling to experience in the middle of the day. Just before and just after totality, observers can see this cloak of darkness moving toward them across the landscape, and then moving away.

These effects are not visible during a partial solar eclipse, so skywatchers are encouraged to see if they are inside the path of totality during the total eclipse.
From what locations will the total solar eclipse be visible?

The path of totality for the Aug. 21, 2017, total solar eclipse is about 70 miles wide and stretches from Oregon to South Carolina. It passes through Idaho, Wyoming, Nebraska, Kansas, Missouri, Illinois, Kentucky, Tennessee, Georgia, North Carolina and South Carolina.

You can use this interactive map from NASA to zoom in on the path and find out the exact locations from which it will be visible.

You can also check out our state-by-state guide to find out which major cities and prime locations will fall inside the path of totality. You may also want to attend one of the many eclipse parties and organized eventstaking place around the path of totality.
When will the total solar eclipse occur, and how long will it last?

The timing of the total solar eclipse and its duration both depend on where you are inside the path of totality.

Because the shadow of the moon will move from west to east, totality will occur later in the day the farther east you travel. Use the NASA interactive eclipse map to find out exactly when totality will occur and how long it will last in the location where you plan to observe the eclipse. Just click on a spot on the map, and an informational box will appear with specific times.
Do I need any equipment to view the eclipse?

Anyone planning to view the total solar eclipse of 2017 should get a pair of solar viewing glasses. These protective shades make it possible for observers to look directly at the sun before and after totality. The following four companies sell eclipse glasses that meet the international standard (ISO 12312-2) recommended by NASA, the AAS and other scientific organizations: Rainbow Symphony, American Paper Optics, Thousand Oaks Optical and TSE 17.

Sunglasses cannot be used in place of solar viewing glasses.

REMEMBER: Looking directly at the sun, even when it is partially covered by the moon, can cause serious eye damage or blindness. NEVER look at a partial solar eclipse without proper eye protection. See our complete guide to find out how to view the eclipse safely.

During totality, when the disk of the sun is completely covered by the moon, it is safe to look up at the celestial sight with the naked eye. (See our in-depth safety guide for more details about when it is safe to view the eclipse with unaided eyes.) Binoculars are helpful for seeing more detail in the solar corona. Telescopes are not necessary, but some skywatchers may use low-powered telescopes.

For more information, see our complete guide for how to view the eclipse safely.

What else should I know before viewing the eclipse?

Aug. 21, 2017, may be one of the worst traffic days in national history, some NASA representatives predict. Although about 12 million people live within the narrow band of totality, approximately 25 million reside within a day’s drive of it, and the agency has estimated that the population inside the path of totality may double on the day of the eclipse.

With that in mind, make sure you plan for extra travel time, especially on the day of the eclipse. Most hotel rooms inside the path of totality have been booked for months or years, so you may not be able to stay inside the path the night before.

When selecting a location where you plan to view the eclipse, keep in mind your proximity to food, water, parking and facilities. Attending an organized eclipse event is an ideal way to make sure those things are close by. Traveling even short distances could be difficult in some areas, and midday in the middle of August can mean punishing heat in many parts of the country.
When is the next time a total solar eclipse will be visible from the U.S.?

In 2024, a total solar eclipse will darken the skies above Mexico and Texas, up through the Midwest and northeastern U.S.

For more information about the total solar eclipse of 2017, check out these additional articles:

How to Survive the Total Solar Eclipse of 2017

How Long Will the 2017 Solar Eclipse Last? Depends Where You Are

How to Safely Watch the 2017 Total Solar Eclipse

Get Ready for Major Traffic Jams During the 2017 Solar Eclipse

Here’s What Scientists Have Learned From Total Solar Eclipses

The 8 Most Famous Solar Eclipses in History

Where to See the 2017 Total Solar Eclipse, State by State

Editor’s note: If you take an amazing photo of the 2017 solar eclipse or any other celestial sight you’d like to share with us and our news partners for a possible story or image gallery, send images and comments to managing editor Tariq Malik at spacephotos@space.com.