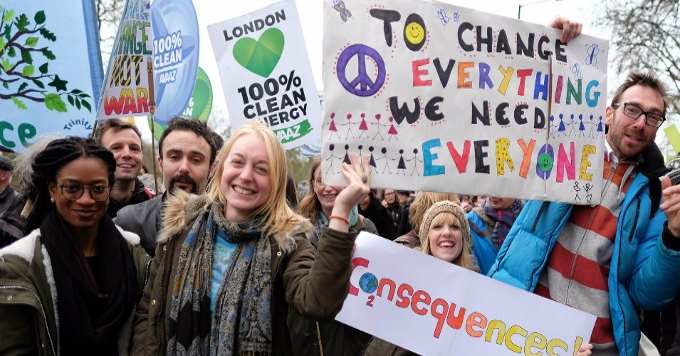 “Have you ever felt it? What it feels like to be alive? To be part of something big? To be with others who have the same dreams?” (Photo: Alisdare Hickson/flickr/cc)

OK, here’s the idea. We’re in a crisis so deep, so knotted, so unprecedented, and so urgent that, well, we have to change everything, pretty much. Or else.

And there’s no one to do it for us. There’s just us. Just-us. Justice.

OK, enough of the solemn words and grandiose tone. What am I really trying to talk about here?

Let’s start with the situation: our operating system here on Earth has gone critical—as in far too many greenhouse gases, poisoned waters, dying oceans, melting ice, heat waves, drought, floods, cyclones, air pollution, land degradation, and on down the long lonely line of the civilizational highlights of the twenty-first century.

This is on top of the poverty, the hunger, the forced migration, the joblessness, the hopelessness, the general lesslessness.

And it’s all inter-connected, isn’t it? Ice melts, exposing more land and open water to the sun, increasing the temperature so more ice melts. The global economy takes your job, then the bank takes your house, the health industry takes back your insurance, and the economy takes someone else’s job who depended on you doing what you used to do. The superpower bombs your village, takes away your family, and puts you on the road to another place, or into armed opposition to that superpower, which bombs another village in another country.

Meanwhile there are very very few real leaders in positions of power, whether running nations or cities, corporations or businesses, schools or universities, media or culture. This was apparent at the recent COP 21 climate summit that gave us the Paris Agreement—where the would-be heroes turned out to be made of paper.

So, it’s up to us. And to change everything, we’ll have to have everyone we can, doing what they think best, giving everything they have.

So we have something more to give.

Will it be enough?

No one can say. Who knows which future we’ll have? Who knows our own power? Who can measure our imagination? Who can imagine our creativity?

Have you ever felt it? What it feels like to be alive? To be part of something big? To be with others who have the same dreams?

Now is the time. This is year one. Today we start. Just us.

Ecosocialist John Foran is a professor of Sociology at the University of California Santa Barbara. He is a member of System Change Not Climate Change and of the Climate Justice Project at the International Institute of Climate Action and Theory.