A revelation in sustainable energy has just been discovered which means that people could soon be generating electricity through the act of walking. A team of engineers at the University of Wisconsin-Madison have recently developed a unique flooring made of entirely renewable and economical material, which creates energy through footsteps. Similarly to this, another group of mechanical engineers at the university had developed a technology which allows energy to be generated through a pair of shoes.

Xudong Wang, who is the lead researcher of the project, believes that his new technology could revolutionize the way that people approach energy. He created his innovative technology using common waste materials, including wood pulp made of cellulose nanofibers which are very inexpensive, renewable, and often retrieved from waste products of industries. This creates an electrical charge when the chemically treated fibers come into contact with untreated fibers. As the nanofibres are put into the flooring, energy is produced which can be used for lighting or even to charge batteries.

The science and innovation website Grendz commented on the clean energy discovery by saying,

“Wang’s research centers around using vibration to generate electricity. For years, he has been testing different materials in an effort to maximize the merits of a technology called a triboelectric nanogenerator (TENG). Triboelectricity is the same phenomenon that produces static electricity on clothing. Chemically treated cellulose nanofibers are a simple, low-cost and effective alternative for harnessing this broadly existing mechanical energy source.”

This new technology could even rival wind and solar energy as it does not need to rely on specific weather conditions. Researchers have also suggested that there is more potential for this sustainable energy than the current fossil fuel reserves. Wang said, “Roadside energy harvesting requires thinking about the places where there is abundant energy we could be harvesting. We’ve been working a lot on harvesting energy from human activities. One way is to build something to put on people, and another way is to build something that has constant access to people. The ground is the most-used place.” 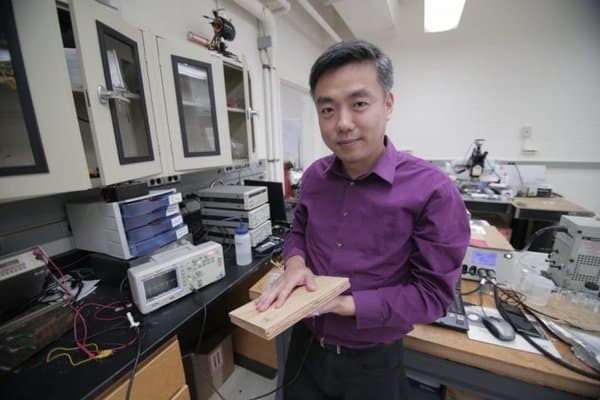 Wang described his huge visions for the new technology, using the example of areas where thousands of people are continuously walking, such as shopping malls and stadiums. He also mentioned that he has developmental ideas of how to expand on the concept in busy places, such as creating multiple layers of the flooring technology, in order to create an increased energy output. He said,

“Our initial test in our lab shows that it works for millions of cycles without any problem. We haven’t converted those numbers into a year of life for a floor yet, but I think with appropriate design it can definitely outlast the floor itself.”

A group of mechanical engineers, who have developed a shoe which has the ability to capture the energy of human motion as steps are taken, have said that this can create enough energy to power mobile phone and other small electronic devices. The new technology, which captures the energy and stores it for when it is required, is said to be extremely useful for those living in remote areas where electricity isn’t easily accessible. As well as this, the engineers also believe that their new technology could be of great use to the military, who currently have to carry around extremely heavy batteries to power their radio devices.

These innovative ideas could change the way that people see power, together with moving away from the excessive use of fossil fuels to an easily accessible alternative. What are your thoughts? Please comment below and share this news!

This article (New Technology Will Allows Human Activity To Generate Renewable Energy) is free and open source. You have permission to republish this article under a Creative Commons license with attribution to the author and TrueActivist.com