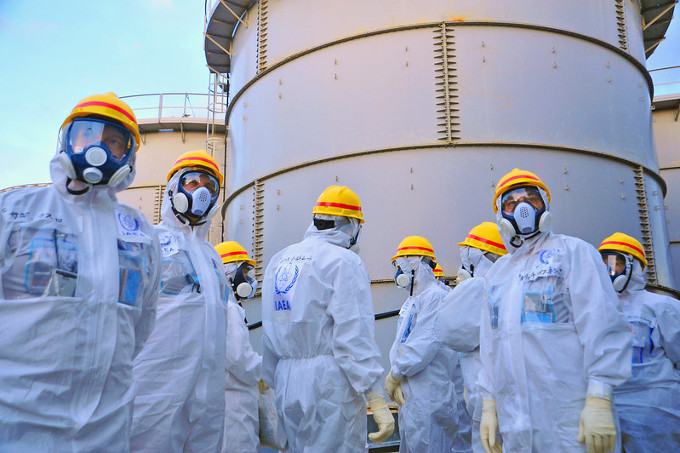 In a decision that sparked condemnation from environmental advocates, fisherfolk, and neighboring countries, Japan announced Tuesday a plan to dump over 1.2 million tons of stored contaminated wastewater from the Fukushima Daiichi nuclear power plant into the Pacific Ocean.

The decision made by Prime Minister Yoshihide Suga’s Cabinet gives Tokyo Electric Power Company (TEPCO) the green light to release Fukushima’s wastewater into the sea just over a decade after one of the worst nuclear disasters in history; discharges won’t begin for two years, as TEPCO prepares for a process that is expected to take decades.

Greenpeace said in a statement that the decision, which has long been contemplated but delayed due to strong public opposition, is a violation of international maritime law that “completely disregards the human rights and interests of the people in Fukushima, wider Japan, and the Asia-Pacific region.”

“The Japanese government has once again failed the people of Fukushima,” said Kazue Suzuki, climate and energy campaigner at Greenpeace Japan. “The government has taken the wholly unjustified decision to deliberately contaminate the Pacific Ocean with radioactive wastes.”

“The Cabinet’s decision failed to protect the environment and neglected the large-scale opposition and concerns of the local Fukushima residents, as well as the neighboring citizens around Japan,” Suzuki added. “Greenpeace stands with the people of Fukushima, including fishing communities, in their efforts to stop these plans.”

Today, the Japanese government decided to dump over 1.23 million tons of Fukushima radioactive waste water stored into the Pacific Ocean. This decision completely disregards the human rights and interests of the people in Fukushima, wider Japan, and the Asia-Pacific region. [1/3] pic.twitter.com/ePREo20xup

Polling data from Greenpeace Japan has shown that a majority of residents in Fukushima and throughout Japan object to the release of contaminated wastewater into the Pacific Ocean. The nationwide federation of Japan Fisheries Cooperatives, in particular, is completely opposed to sea discharges.

As Al Jazeera reported Tuesday, “Local fishing communities worry that years of work to convince consumers that Fukushima’s seafood is safe will be wiped out by the release.”

An official with the association of Fukushima fishermen unions told AFP: “The message from the government that the water is safe is not reaching the public, that’s the huge problem… Our efforts in the past decade to restore the fish industry will be for nothing.”

According to the Associated Press:

The plant’s operator, Tokyo Electric Power Co., and government officials say tritium, which is not harmful in small amounts, cannot be removed from the water, but all other selected radionuclides can be reduced to releasable levels. Some scientists say the long-term impact on marine life from low-dose exposure to such large volumes of water is unknown.

The government stresses the water’s safety, calling it “treated” not “radioactive,” even though radionuclides can only be reduced to disposable levels, not to zero. The amount of radioactive material that would remain in the water is unknown.

Last year, Jan Haverkamp, a senior expert on nuclear energy policy at Greenpeace, warned that there remains “a lot of uncertainty about the effects of tritium.”

“The moment that I hear the word ‘treated’ being used instead of ‘contaminated,'” Haverkamp said, “I can’t think differently than this is a kind of newspeak.”

Disposal of contaminated wastewater has been delayed for years by safety concerns and protests, but Suga told lawmakers that releasing it into the Pacific Ocean was “a problem that cannot be avoided” because, according to the New York Times, “the space used to store the water is expected to run out next year.”

But Greenpeace’s Suzuki said the Japanese government “has discounted the radiation risks and turned its back on the clear evidence that sufficient storage capacity is available on the nuclear site as well as in surrounding districts.”

“Rather than using the best available technology to minimize radiation hazards by storing and processing the water over the long term,” said Suzuki, “they have opted for the cheapest option, dumping the water into the Pacific Ocean.”

This is truly appalling. Don't know what to do with radioactive pollution following a catastrophic accident ? – Just dump it in the sea.
https://t.co/EKHrJayM1P #Nuclear #Fukushima #Pollution #Japan

According to a Greenpeace report (pdf) published last month, there are “alternatives to the current flawed decommissioning plans for Fukushima Daiichi, including options to stop the continued increase of contaminated water.”

Last year and again last month, the United Nations’ human rights special rapporteurs warned Japan’s government that discharging the wastewater from the Fukushima nuclear plant into the environment violates the rights of its citizens and neighbors. The U.N. pleaded with Japanese officials to postpone any decision on dumping the contaminated water into the sea until after the Covid-19 pandemic was over so that adequate international consultations could be held.

Japan’s plan to release contaminated wastewater has been denounced by Beijing and Seoul.

South Korea on Fukushima water dump: "This decision… is outright unacceptable. The National Assembly, civic groups, local government and councils are all against the decision, and fisheries workers, experts and public opinion within Japan have also been against the move." (MP)

Jennifer Morgan, executive director at Greenpeace International, said that the current plan for wastewater disposal “is a violation of Japan’s legal obligations under the United Nations Convention on the Law of the Sea (UNCLOS), and will be strongly resisted over the coming months.”

“In the 21st century, when the planet and in particular the world’s oceans are facing so many challenges and threats, it is an outrage that the Japanese government and TEPCO think they can justify the deliberate dumping of nuclear waste into the Pacific Ocean,” said Morgan.

Our work is licensed under a Creative Commons Attribution-Share Alike 3.0 License. Feel free to republish and share widely.