By Dafna Tachover, Esq | The Defender

Zorach (Zory) Glaser Ph.D., LT, MSC, USNR, is one of the most important scientists to study the impact of wireless technology on human health. His career as a government research scientist spans decades working for the U.S. Navy, the U.S. Public Health Service, the National Institute for Occupational Safety and Health (NIOSH), and the U.S. Food and Drug Administration’s Bureau of Radiological Health.

Glaser’s extensive archive of nearly 4,000 documents, now available to the public, provides clear evidence that the harmful effects of wireless were known long before cell phones and wireless technology were commercialized in the early 1980s.

The archive materials reveal that the U.S. government, particularly the military, knew for decades of the harm wireless technology can cause to human health. During World War II, the U.S. military started to use radar, and the use of radio telecommunications systems was growing.

Soldiers working with these systems, which use radio and microwave frequencies  — the same frequencies used for wireless devices such as cell phones and Wi-Fi — began to complain of adverse health effects from exposure to the radiation emitted by these systems.

At the time, the illness experienced by these soldiers was referred to as “Radiation Sickness /Microwave Sickness.”

Glaser was assigned by the U.S. Navy’s Naval Medical Research Center to investigate. He spent about a decade collecting every study conducted within and outside the U.S. showing that the radiation emitted from radio frequencies (RFs) and microwave frequencies may cause adverse health effects.

Pages 5-12 of the report’s bibliography list these adverse effects, including damage to vital organs and other tissues and the central nervous system, physiological and psychological effects, blood and vascular disorders, metabolic and gastrointestinal disorders, and endocrine and histological changes.

At that time, it was mostly only military personnel who were exposed to high levels of microwaves and RF radiation and who developed Microwave/Radiation Sickness.

But today, the whole population is exposed to levels of radiation that are millions and sometimes billions of times higher than they were when Glaser started his work a few decades ago. 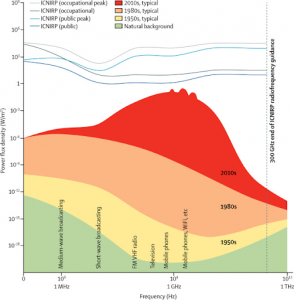 The “Microwave Sickness” symptoms suffered then by the military personnel are now widely seen among growing numbers of people in the general population who are exposed to this electro-smog pollution from wireless devices. The sickness also referred to as electro-sensitivity, is estimated to affect 10% of the general population.

Glasers’ studies and reports are of the utmost importance and relevance to existing harms from current wireless technology, including 5G, cell towers, Wi-Fi, and cell phones which use the same type of frequencies and intensities as those studied by Glaser. For this reason, Glaser’s reports have been crucial in supporting advocacy efforts and letting the public know that despite what the government and telecom say, there is more than ample evidence of harm from these exposures.

A few years ago, when Glaser realized the importance of his archives, he donated them to Dr. Magda Havas, Ph.D. of Trent University in Canada. Havas, an associate professor of environmental and resource studies, has worked for more than a decade to expose the harms of wireless technology.

According to Havas, Glaser’s archive contains quite a few “gems.” “Zory was a packrat (his words) and he kept everything, Havas said. “I found one paper that was circulated to only nine people with health recommendations that were ignored.”

To make these important documents available to the public, Havas and her team have worked for years to scan all the documents and make them searchable. So far Havas’ team has scanned 20 out of the 25 boxes of Glaser’s archives.

Because of the archive’s magnitude, the public is invited to help review the documents. Scholars who are interested are invited to write short overviews of some of the more useful and relevant finds and post those overviews on Zory’s website. People who find important information are asked to let Havas know.

If you are interested in participating in this project, please contact Dr. Magda Havas (drmagdahavas@gmail.com) with a subject heading of “Zory’s Archive.”

Dafna Tachover is the director of Stop 5G and Wireless Harms Project for Children’s Health Defense. She is an attorney…